2016 will be remembered as a game changer in the world of politics and music.

That was true for Wildlands League as well. While our work is always dynamic, this year, we knocked it out of the park. 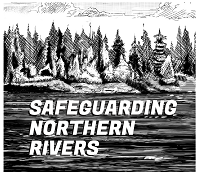 We launched a private prosecution to hold a diamond giant to account and told the story of the diamond mine in a graphic novel, sought appeal to the Supreme Court of Canada and appeared before the federal Standing Committee on the Environment – twice. We released reports, presented at conferences and hosted a caribou event with Tembec and had over 70 publications cover our issues. We had an ad in the Globe and Mail on caribou and one in the Toronto Star on protecting the North French River.

And if that weren’t enough, we paddled the Rouge with the Prime Minister, welcomed new legislation on the Rouge and taught 50 youth to paddle.

And even though it is the end of the year, we wanted to continue as we mean to go on in 2017, with the introduction of our Moose Project:

Moose numbers have declined drastically. The decline in moose numbers in the last 10 years is 20%. Moose are an important part of the forest ecosystem as a food source for ravens, wolves and bears. If we do not act to slow and stop their decline, the social and economic value of Ontario’s forest will be diminished. See our infographic for solutions, or learn more on our new Moose page.

On behalf of all of us at CPAWS Wildlands League, we extend our sincere thanks for your support in 2016. Whether you signed a petition, shared a Facebook post, sent us a note or made a donation, knowing you are with us, fortifies our efforts.

There’s so much to celebrate this year.

Thank you.  We couldn’t do it without you.